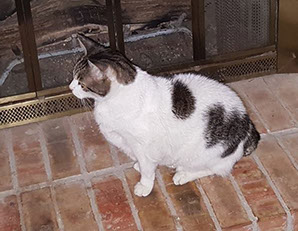 Happy New Year to all of you at Young Again Pet Food. I am very happy with the results for my kitty cat Leona. She used to weigh 19+ pounds and the fat has melted away to a 8 pound kitty cat.  Thanks!! 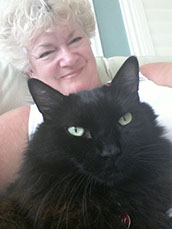 I can’t express enough the blessing Young Again Zero Mature Cat food has been for me and my cats.  I have three Sammy (picured), Sadie and Simon.  Sammy was overweight and has a growing fatty tumor on his shoulder.  I’m excited to say Sammy has lost weight and the fatty tumor has almost completely gone away!!!  This food has given my cats beautiful coats, spunk and a lot less throwing up.  I used to vacuum every day a small kitten…LOL…now there is a lot less hair loss which means less vacuuming for me!   This company is absolutely wonderful to work with and is always willing to help you and your pet with any problems that arise. #LOVINGYOUNGAGAINPETFOOD

I put our ex-feral cat Moon on your food when he got up to 17 lbs on a vet prescribed urinary diet for his crystals and cystitis. He fully blocked at the time. He's down to a respectable 14 lbs now for his size. His friend Rupert, who is an ex-feral we took in a year ago is FIV positive and had terrible dental issues. We dealt with that and he's gained and maintained at also 14 lbs.

Feral cats tend to have food insecurities, so I love that I can leave multiple bowls of food out without worrying about them overeating.

Moon also has food sensitivities, so I'm thrilled that your new mature LID diet helps both his issues. 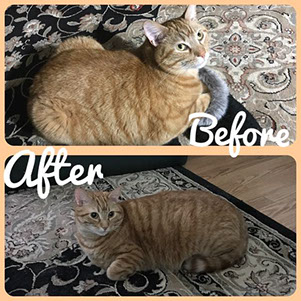 I wanted to share a before and after photo of one of my "kids." This is Mr. Darcy who was quite the "pudge-muffin" before Young Again Pet Food. After just four (4) months he has lost weight, although I haven't actually weighed him, I can tell by looking at him! He is much slimmer and trim. He looks like a healthy cat! I can't call him "pudge-muffin" anymore. While you may not be able to see a large difference from the pictures, we certainly can. Thanks YAPT for making a healthy pet food for my"kids!"

Simba gained his weight solely from free-feeding dry cat food.  Since there were 2 other cats in the house, one being diabetic (Max), I needed to leave food out at all times. I first came across YA cat food in search of helping Max, but when he passed away we followed the Vet's suggestions and put Simba on a prescription dry food diet. After a few months of eating the prescription food he still didn't lose weight, our vet suggested putting him on a feeding schedule of dry and wet prescription food. This left everyone miserable! Simba was starving by the time of his feedings and would gobble up his food so fast that he ended up vomiting.  I started searching for other options when I remembered Young Again Cat Food.  I admit to being skeptical at first.  The calorie count of this food seemed a bit high and Simba didn't seem that interested in the food when I had gotten it for Max. But the staff at YA was great, offering me suggestions and recommending the current food we feed him now, Mature Zero Carb. Since Simba had so much weight to lose and I was concerned with him getting hepatic lipidosis I did supplement the free feeding of YA with a small amount of zero carb wet canned food each day. I left 4 bowls of YA cat food in different rooms of the house and gave Simba a small serving of wet food 2 x's a day.  I now had a happy cat who was also losing weight!  My family also noticed a big change in his behavior. He became a frisky kitten again!

I have been slowly weaning Simba off of the wet food. He eats about 2 teaspoons of it a day now and sometimes doesn't even want that. He is pretty happy with free feeding of YA cat food! I plan to have him solely on YA by the end of the month to insure that he looses the remaining few pounds.

Your company has been a lifesaver not only to Simba, but also to our diabetic cat, Max. Unfortunately he didn't live long enough to reap the full benefits of YA cat food, but YA cat food did allow him to get off insulin in the last month of his life.

WHY YA CAT FOOD IS DESIGNED THE WAY IT IS

THE IMPORTANCE OF FREE-CHOICE FEEDING