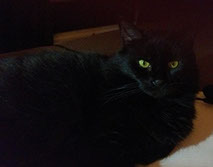 JUST 17 DAYS OF EATING YA ZERO and Onyx is OFF THE JUICE!

Onyx is OFFICIALLY off the juice!

I am happy to report that she is on day 3 of her remission trial. She was on YA for 17 days, when her body no longer needed insulin. She’s had no insulin for 2 weeks and she’s doing great. I couldn’t be more excited!!!! I have a detailed spread sheet that truly shows just how much the food affected her blood glucose. Take a look, it’s quite interesting. This is definitely worth celebrating!!! 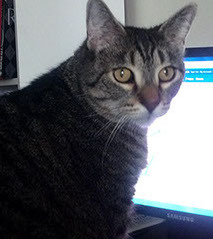 I’d like to share with you the journey of Tigger, my angry diabetic cat, since he was diagnosed with diabetes May 29, 2013 to now.

Tigger has always been a big kitty – we think he may have had some zoo-type animal breed in him. (his nickname is Freaky Long Zoo Cat).  We’ve had him since he was 6 weeks old.

In May 2013, I started noticing that I had to buy more litter – the pee ‘piles’ that were in the box were ridiculously heavy and huge. I noticed Tigger was always by the water dish, I caught him several times in the sink (this is a no-no) and he was always in the bathtub begging for the water to be turned on. Since I’ve had no experience, I turned to my friend who is a cat expert.  She told me it sounds like he has diabetes and I needed to take him to the vet.

So we made an appointment and off to the vet we went.  Believe me when I say it was an ORDEAL. He was so uncooperative (he was scared, the poor thing) the vet could barely perform any exam on him, but I told her all his symptoms, and she agreed to have blood drawn to see if he was indeed diabetic.

Well, that didn’t work – he was so uncooperative we had to sedate him and bring him back the next day. When we finally got the blood work, it was confirmed. Tigger had diabetes. His blood sugars were 580 on that day. I had a long talk with the vet and we had a plan. Since it was newly discovered we decided to try diet change first.

Well, needless to say Tigger does not like any type of wet food. And believe me, I tried them all. NOTHING. So I then tried the vet diet cat food. I also bought a glucometer and strips since going to the vet was not an option for my little angry cat. After a month on the vet food, his numbers were still in the 400s. So we had to start insulin shots. I’m taking a moment to remind you, Tigger is an angry diabetic cat. He did NOT like the shots, AT ALL. He didn’t care if I gave him a treat, he didn’t care if I gave him catnip. In the middle of August 2013, I heard about an amazing cat food company – Young Again. Low and behold they had a Zero Carb cat food!!  Just for diabetic kitties!! I called the company and placed my order. The next day, I get a call from Jennifer, at Young Again. She wanted to know all about Tigger and my journey so far (it’s been bloody, I assure you). We started Young Again for both cats (Princess is a go-along-to-get-along cat) on 8/15/13. His blood glucose was 400 that day.

As the days changed to weeks, I started noticing a trend in Tigger’s sugars.  They were gradually going down! With approval from my vet, we went from 3 units to 1 unit of insulin. By 9/1 his sugars were down to the low 300s. By 9/15, his numbers were in the mid 200s. By 10/15, his numbers were in the 100s!! We could officially skip insulin doses!  After discussion with my vet, on 10/30/13, we were officially OFF OF INSULIN!!!  Because I’m a skeptic, I continued to monitor him once a day for another week, then backed off to once a week, and now I’m down to once a month.

I cannot even begin to tell you how happy I am with Tigger’s progress. He would still be on insulin if not for Young Again Zero Carb food. Jen routinely checks in with me and Tigger to see his progress, how’s he’s doing, what’s his energy like. Michael, the owner of Young Again even called to talk to me about Tigger’s progress when he came off of insulin. I don’t know about you, but what other cat food company will call and talk to you at length about the health of your cat?!? Their ‘bottomless bag’ program will ensure you will never run out of food. The shipping is free and amazingly fast!

I wholeheartedly recommend Young Again to any kitties out there. The support, the love, the caring you get from Young Again will truly amaze you. They honestly saved my cat from diabetes – and that is something I cannot thank them enough for. So, from the bottom on my heart, and Tigger’s paws, thanks for making a huge difference in the life of my kitty. 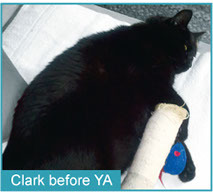 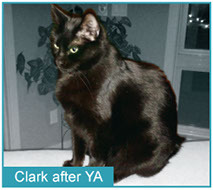 Young Again Client Charts Her Cat's Journey Back to Health

It’s been a couple months since I spoke with you last. Below is the information I said I would share regarding the journey I took with my diabetic cat, Clark, who is seven years old.

In late August 2012, Clark was diagnosed with diabetes. He was drinking copious amounts of water (was obsessed by it, actually), using the litter box constantly and was very listless. In the first month, I administered 2 units of insulin 2x/day, he lost 0.5 lbs and his feeding went from free choice to twice/day.  In the second month he was up to 4 units of insulin, he wasn’t drinking quite as much water, his weight had stabilized but his glucose was not regulated as was evident by the glucose curves that were performed at the vets office each month. I did this twice and then stopped taking Clark to the vet due to the stress it caused him. In the meantime, with the feeding schedule changed to twice per day, Clark and his brother, Lewis, became annoyingly preoccupied with food. Since I was the principle feeder in the house, the two of them would stampede the door when I came home each day from work.

Late in October since Clark was still drinking more water than was normal, but not as much as in August, and he was still using the litter box a lot; I upped his insulin to 5 units 2x/day. It was at this time that I found Young Again Pet Food online and I purchased a bag of the zero carb cat food. It was at the same time that I found a tight regulation glucose monitoring protocol that required home monitoring of the glucose and injecting a specified amount of insulin according to what the glucose reading was at that time. I purchased the equipment and supplies needed and made a valiant attempt at collecting blood from Clark without success.

I received the bag of Young Again food a few days before Thanksgiving. Since I wasn’t going out of town for the holiday,  I thought that would be a great time to switch Clark to the new food while I was home.  Before I did that, I called Young Again and spoke with Michael. Per Michael’s recommendation, I completely switched Clark on Thanksgiving Day from his previous food to the Young Again Zero Carb cat food and went back to feeding free choice. Michael also recommended a couple websites to provide guidance on the collection of blood for the glucose monitoring. I began monitoring Clark’s sugar 2-3 times per day.

Almost immediately Clark’s obsessiveness with food disappeared when he had food available at all times.  Within the first week, I began to see his glucose levels go down. In the second week, I pulled out the tight regulation protocol and realized that I wasn’t following it as indicated. The protocol directs measuring the glucose every 8 hours. I was only doing it when it was convenient for me and because of that, Clark’s glucose was not kept in tight control. Once I began checking his glucose every eight hours and administering insulin accordingly, supportment in his levels really began to show.

I stopped monitoring Clark’s blood sugar on January 17, 2013, almost three months to the day that I began feeding Young Again Zero Carb cat food. Since then, Clark no longer requires insulin, his water consumption is normal, his coat is shiny and beautiful and he is much more playful, energetic and generally happy. The graph below shows all the glucose measurements taken between 11/22/12 - 1/17/13.

I’ve recommended Young Again Pet Food to numerous people. One of our friends has switched her two cats to the low carb food in an effort to avoid diabetes. Her cats are loving it.